The store will not work correctly in the case when cookies are disabled.

As the leading provider of LED upgrades, Diode Dynamics offers several plug-and-play replacement bulbs in the 5202 (H16-US) and PSX24W size, including our SLF Fog Light LED Bulb! Unlike generic fog light LED bulbs that produce tons of glare, the SLF was engineered with advanced optical design software to achieve a bright, completely focused beam with no wasted light!

There is a great deal of confusion when it comes to the differences between 5202, H16, and PSX24W bulb sizes. The main source of confusion is the fact that "H16" is used for two types of bulbs: in Japan, it is an H11-style bulb, with standard H11-size base, running at a lower power level. However, in Europe, "H16" was used to refer to the newer tab-lock style of bulb.

So what is the difference between 5202 (H16-EU) and 2504 (PSX24W) bulb sizes? They are both tab-lock style bulbs, but they have differences in the alignment tabs on the base. 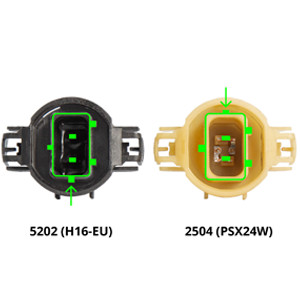