High intensity discharge (HID) lamps are used in many applications for their high efficiency and brightness levels. You can find them in stadiums, warehouses, and of course, on automotive headlamps. In automotive applications, the total brightness can vary widely based on the quality of the components, operating temperature, condition of the bulb, and other factors.

Brightness of light for HIDs is usually measured in lumens, or the total amount of light generated. Lumens are the unit of luminous flux, which is the total power of light. To measure lumens, an HID bulb is placed inside a sealed reflective sphere, known as an integrating sphere, and its light is bounced around in all directions in the sphere (integrated) so its power of light can be measured at one point, and then calculated into lumens based on the size of the sphere.

The light source of all HIDs is an electrical arc, flowing between two electrodes in the bulb in a glass "bubble," or arc chamber. This converts electrical energy into light. Read more about this on the HID Bulb page.

The color of the bulb is important in determining the total output. An HID bulb produces many different colors of light, which are combined by your eye to create the white light you see. In addition to the visible light spectrum, HIDs also generate some ultraviolet light, which is not visible.

The brightest bulb color is 4300K, as it produces the least amount of UV light. You can see almost all of the light that is generated.

To achieve a "cooler" or bluer color with HIDs, the bulb is designed to output more blue light. However, as the color output shifts more to blue, more UV light is also produced, which is not visible! This is not a major issue with cool-white colors, but deep-blue HID bulbs will waste a lot of light output, because they will be generating so much invisible UV light.

No reputable company will offer deep blue or purple colors of HIDs, as they do not produce very much visible light. Additionally, white is the only legal headlight color in most areas.

HID bulbs are not perfectly efficient at converting electrical energy into light. There is a lot of heat that is also generated in the process. If an HID bulb is 50% efficient, and you drive it at 30 watts, that means that only 15 watts will be converted to light, and 15 watts will be lost as heat.

We can also measure the performance of a bulb by saying that it generates a certain number of lumens per watt of input power. This is known as efficacy.

HIDs are used as a replacement for halogen lamps because they are much more efficient, and have higher efficacy. A high-quality, standard D2S OEM HID bulb at 35 watts produces 74 lumens per watt. The highest-efficiency halogen bulbs produce only 38 lumens per watt, at maximum.

Is it really 55W? Before reading this section, know that most "55W" kits on the market aren't even 55W! Read more about this on the HID Ballast page. A cheaper ballast that is rated at 55W of input power, not output. Nearly all "55W" kits are actually only 35-40 watts, and they are just charging you more for a kit that's really about 35W. You can test this for yourself, as this hobbyist did.

But let's say you pay a bit more, and get a kit that is indeed running on 55W.

More power means a more intense arc of light, and more brightness. However, it adds a number of risks, so Diode Dynamics does not recommend 55W HID lighting, for the following reasons:

Heat: More power also creates more heat! As power is increased higher in an automotive HID bulb, the bulb gets less efficient. If you increase 1 watt, you may get an additional 20 lumens. If you increase another watt, you might get only 19 more lumens. Eventually, you won't get any more brightness, just heat. This is called a diminishing return.

HID bulbs are designed for 35W, just like all factory-installed OEM HIDs. Running them at 55W of power is just "overdriving" them. There are no HID bulbs specifically designed for 55 watts of power. That just means that the color is corrected for that much power level- read more about this on the HID Color page. 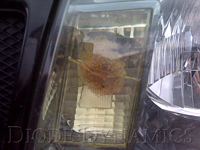 Damage from heat due to a 55W HID kit

This means that much more heat will be created with a true 55W of power, which is extremely hazardous, as it might melt sockets and housings. It is not cheap to replace a modern headlamp.

Power Draw: If a ballast is outputting a true 55 watts of power, that means it must draw about 65 watts of power, and when it ignites, it draws a great deal more. Your factory wiring is only designed to provide 16-55 watts, depending on the bulb size, and if you wire the HIDs through your factory wiring, that much power draw can destroy factory wiring, and at worst, kill your car's "motherboard," which is usually around $1000 to replace. You must always use a relay with 55 watt, but not all customers will go to the extra trouble to use the HID relay, creating a very dangerous situation.

Bulb Life: The HID bulb emits light by creating an electrical arc between two electrodes. Over time, the electrodes wear down, which is why HID bulbs have a specific lifespan. By increasing the intensity of the arc, you are just "running them hotter," which will wear down your bulb much faster. A bulb running 55W will usually last about half as long as a bulb running 35W.

Brightness: 35W bulbs driven by a true 35W ballast will provide at least 3200 lumens. This is over double the brightness of a factory halogen bulb, and plenty of light for night-time driving. Since there is diminishing returns to additional power, a true 55W kit will only output around 4000 lumens, which is only a 25% increase, and might actually be too bright for comfortable nighttime driving!

Why is there 55W? Most 55W kits don't actually output 55W, and they are just an upsell. The costs of manufacturing 55W ballasts and bulbs is the exact same, but companies know that they can charge more for it. It's a great way to charge a few more bucks. You may even see "75W" HIDs! Nonsense! Stay away, it's just an upsell.

Not Worth It: If you do find a true 55W kit, it will add excessive heat, electrical draw, and decrease the lifespan of your bulbs. Any company that has its customers' interests and safety in mind will not honestly provide 55W HID lighting.

Watch out! Many suppliers will just use "benchmark" lumen output numbers, based on the normal performance of an OEM-quality HID bulb, driven by an OEM-quality ballast. However, most HIDs on the market are not high quality, meaning they will waste much more power as heat, and won't come anywhere close to the lumen output as advertised.

An OEM HID setup will produce 3100 lumens, but most aftermarket kits will only produce around 2500 lumens. However this is still better than a factory halogen bulb though, which usually produces around 1200 lumens.

But why don't they provide true measurements? It is quite expensive to test actual lumen output- integrating spheres can cost up to $100,000- but suppliers know it is a great way to compare bulbs. If you see what seems like a completely arbitrary, rounded lumen rating, such as "3600 lumens," it probably is just that- a completely inaccurate guess. They probably didn't actually measure their ballast and bulb in an integrating sphere, as is done at reputable companies like Diode Dynamics.

If your supplier has a lumen rating, they should also provide the measurement data or information explaining how they arrived at that number. If they won't tell you how they got their lumen rating, stay away! It's probably a complete guess.