LED bulbs of various design
LEDs are individual electrical devices that normally require around 2-4V for operation. Since an automotive circuit provides 12-14V, this means that LEDs must be designed into circuits so that they can operate properly. Additionally, a base connector must be added so that the LEDs can be installed by direct replacement of a standard-sized bulb.

There are many considerations when it comes to designing an LED bulb for automotive use, including fitment, light output, heat, power consumption, and appearance. At every step of the way, real-world testing on a vehicle is paramount to ensuring good design.

Connector fitment. When creating an LED bulb, a designer must start with a correctly-sized base that fits properly in the intended socket. While it might be easy to assume that a 7443 base will fit into a 7443 socket, this is not always the case. It should plug in easily into the socket, while still being held securely in place. 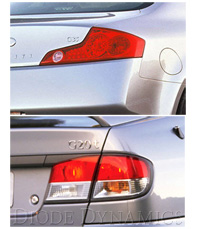 Newer G35 tail light vs the older G20. Note the much-smaller reverse light housing in the G35.
Pin alignment.In an LED bulb, the electrical connectors, or pins, are soldered to a circuit board. A bulb designer must use electrical contact pins that are in the proper location, long enough, and the correct thickness, to make perfect electrical contact.

Bulb width. After you have plugged your LED bulb into the base and it lights up, you must usually insert it into a factory housing. If the bulb is too wide, you won't be able to get it into the housing at all. Some bulb designers assume that the width of the base determines the maximum width of the bulb, but this isn't true! You should never need to make any type of modification when installing a properly-designed bulb.

Bulb Length. As vehicle design evolves, reflector housings can be designed smaller, so there is less space for the bulb in the housing. For example, just compare a backup light housing on an Infiniti G20 compared to its successor, the G35. A bulb might fit in the G20 housing just fine, but might be too long to fit in the G35 housing.

The LED on the left is actually lower total output, but uses a projector to direct the light better.
Brightness. First and foremost, a designer must ensure that an LED bulb is equal or greater in total brightness (lumens) than the factory bulb it is intended to replace. For safety reasons, this is especially important in turn signals and brake lights.  For more information on LED Brightness, click here.

If an incandescant bulb is replaced with a directional LED, the reflector will not be able to direct light properly, severly altering the function of the light. In some applications, this can be dangerous. It is always best to use an LED bulb designed to emit light in all directions, usually by the use of multiple LEDs which point in different directions.

Examples of bulbs with LEDs pointing in multiple directions for better performance.

However, there are some situations in which a directional light is desired. For example, the function of backup lights might be improved by a light that shines directly behind the vehicle. Map lights are directional, so an LED might only shine in one direction. For this reason, it is important to design LED bulbs for specific purposes.

Think of it as the arch-nemesis of LEDs. Heat, or thermal stress, is almost always the cause of premature failure in automotive LED bulbs.

Heatsinking designed into an automotive bulb
On an individual level, each LED is heavily dependent on operating temperature. Luminous flux, or brightness, and chromacity, or color, varies based on the temperature of the LED. Generally, brightness begins falling heavily if an LED gets too hot.

For these reasons, a bulb must be designed to operate at a specific temperature. This is difficult, as operating temperature is all relative to the ambient temperature, or how hot it is outside. LEDs will perform slightly differently in the winter vs the summer. Additionally, bulbs are often sealed into light housings, where there is no airflow, drastically reducing the ability of the LED bulb to cool itself.

Heatsinking designed into an LED bulb for home lighting

The primary goal is to keep a bulb as cool as possible, which means heatsinking features must often be incorporated, to dissipate heat. The more surface area available, the cooler the bulb. In automotive applications, though, bulb size is very important, so the designer must only operate within size limitations when creating heatsinking features- truly a challenge!

A resistor as commonly used in automotive applications

In general, LED bulbs consume far less actual power than the bulbs they replace. A standard license plate bulb is 5W, while the LED replacement might only use .1W! Usually, this would be a good thing, but many automotive electrical systems sense the power consumed, or resistance, in order to alert the driver when a bulb has gone out. Every vehicle starts blinking the turn signals quickly when the power consumption is low, for example. Some vehicles also use CANBUS systems, which monitor many different bulbs.

For this reason, it is actually advantageous to consume more power than the LEDs need, to replicate factory power consumption. The only way to do that is by using resistors, which convert excess power to heat.

Resistors on the base of a CANBUS bulb

If extra resistors are added to an LED bulb for the sole purpose of consuming extra power, it is usually referred to as a "CANBUS" bulb. However, this does not necessarily mean it will have enough resistance to overcome the vehicle's sensors. Some vehicles require just a little bit of resistance to turn off bulb out warnings, but others require exactly the same resistance as factory.

To make an LED bulb consume the same amount as factory, it would take a lot of resistors, so very few "CANBUS" LED bulbs actually use the same power as a factory bulb. They won't provide the same resistance as a factory bulb, so even if you purchase "CANBUS" bulbs, you might still get bulb out warnings if you have a CANBUS vehicle. For this reason, it's important to determine whether the bulbs have actually been tested to overcome the system in your particular vehicle.

The last consideration to make is the appearance of the bulb when it is off. Reflectors will bounce around the color of the bulb, which you can see in many factory-installed front turn signals. The light will look amber when off, due to the amber-colored coating on the factory bulb. When modifying a vehicle for cosmetic purposes, it is usually desirable to remove this source of color.

The same LED component with and without a diffusing cover, which diffuses the yellow color as well as the light output.

Due to the way white LEDs are made, they appear yellow when off, which leads to the same undesirable results. For this reason, it is advantageous to cover the LED itself with a semi-transparent diffusing cover, which diffuses the yellow color that is visible. Again, this can be difficult, as size doesn't always permit for this feature.